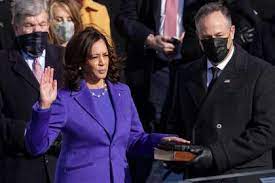 , 2021 was a historical day for all women. As I watched the first woman to be sworn in as Vice President, I had tears in my eyes because I had doubted I would see it in my lifetime.  The glass ceiling is finally shattering.

When I was a young woman looking for a job in the newspaper ads (yes, real newspapers), they were listed as “Men’s Jobs” and “Women’s Jobs”. On job interviews it was common to be asked if I was planning on getting married and getting pregnant. Men working beside women in the exact same job were paid more with the reasoning men had to support families. The single man without a family, working beside the single mother working to support her children, earned more. Married women were typically paid less because, after all, they “had a husband to take care of them”.

When I became pregnant with you, my boss asked when I planned to quit. Maternity leave was not an option. Birth control was not always available to single women let alone a woman’s right to control her own body.

I am so proud of the strides you’ve made in your own career and life. The sky’s the limit now. Never forget what a strong woman you are and the strength of women when they unit.  My generation fought hard for equality. We now pass the torch to you and the generations of women to follow. We’ve come a long way, but remember to remain vigilant. Let NO ONE infringe on your rights for equality.

Every woman is a warrior.

Signup for inspiration, motivation, education, and special offers and a FREE GIFT!

As a thank you gift, I would like to give you a copy of the eboook

“Joy in the Morning”

We will not spam or share your email. You may opt out at any time. It is our policy to respect your privacy regarding information we may collect from you or that you may provide to us.